The building blocks of information transfer in language processing 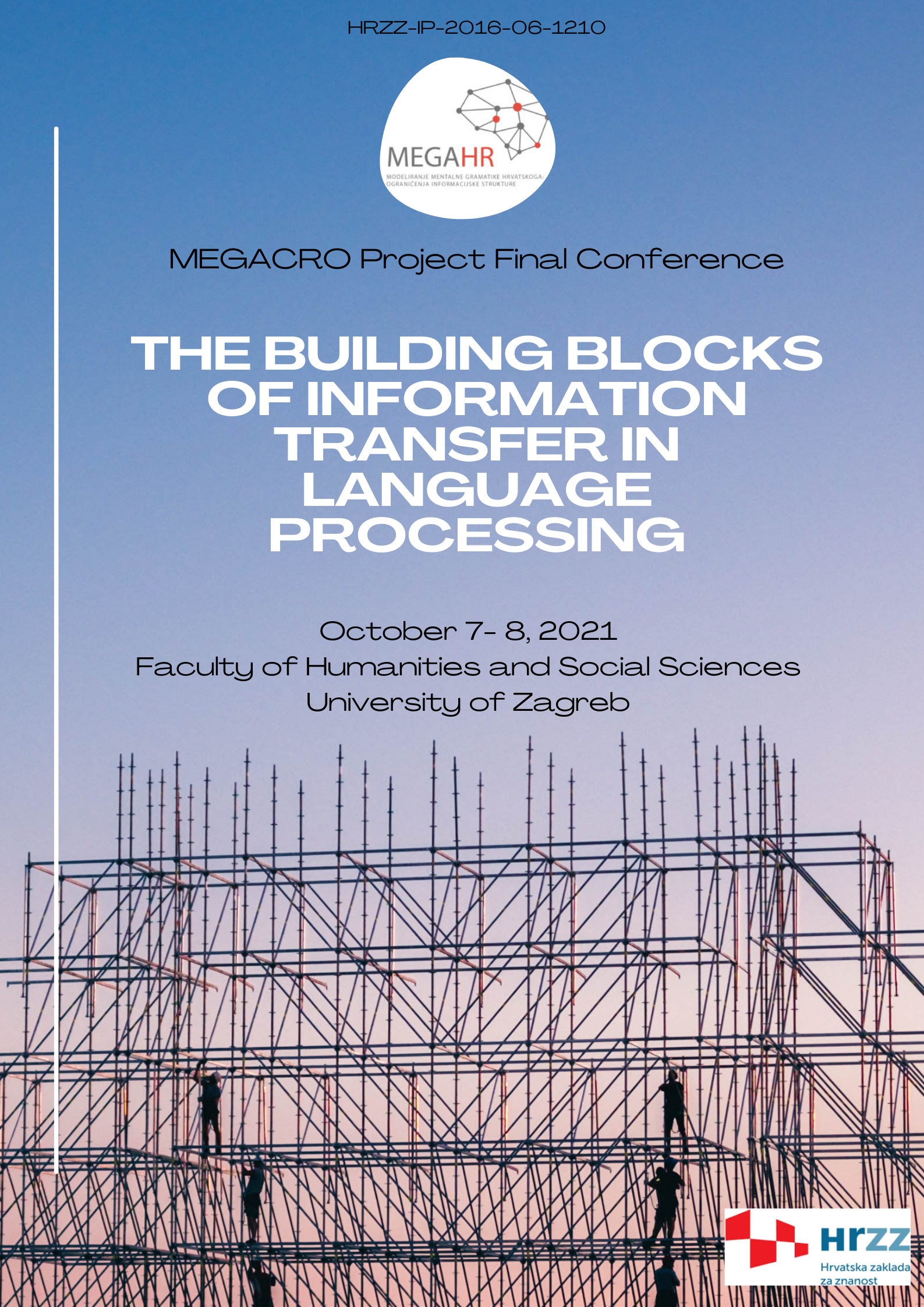 Welcome to the final conference of the MEGACRO project! In addition to the project presenting the results of the project, eminent invited speakers will provide a broader background to the issues discussed. All the talks will be followed by ample time for discussion, where everyone is welcome to join.

Conference Registration: To register as a listener (and to attend the conference online) click here.

Marianna Bolognesi received her PhD from the University of Torino, Italy, where she worked on the structure of the mental lexicon in native speakers and foreign learners. Her research bridges psychological (behavioral) methods with semi-automated methods for language modeling (distributional semantics), and corpus analyses. Specifically, her research focuses on how abstract thought and on how metaphors enable humans to conceptualise, express and represent intangible concepts through words (in language) and through images (in visual communication).

She is currently Senior assistant professor at the University of Bologna. Between 2015 and 2017 she worked as a EU-MarieCurie awarded research fellow at the Metaphor Lab Amsterdam, where she still coordinates the research area on Metaphor and Multimodality. For two years (2017-2019) Bolognesi worked within the Creative Multilingualism group at the University of Oxford and their collaboration is still ongoing. She is also member of the executive board of the RaAM International Association for Researching and Applying Metaphor.

Peter Hagoort is director of the Max Planck Institute for Psycholinguistics (since November 2006), and the founding director of the Donders Institute, Centre for Cognitive Neuroimaging (1999), a cognitive neuroscience research centre at the Radboud University Nijmegen. In addition, he is professor in cognitive neuroscience at the Radboud University Nijmegen. His research interests relate to the domain of the human language faculty and how it is instantiated in the brain. In his research he applies neuroimaging techniques such as ERP, MEG, PET and fMRI to investigate the language system and its impairments as in aphasia, dyslexia and autism.

For his scientific contributions, the Royal Netherlands Academy of Arts Sciences (KNAW) awarded him with the Hendrik Mullerprijs in 2003. In 2004 he was awarded by the Dutch Queen with the “Knighthood of the Dutch Lion”. In 2005 he received the NWO-Spinoza Prize (M€ 1.5). In 2007 the University of Glasgow awarded him with an honorary doctorate in science for his contributions to the cognitive neuroscience of language. In 2008 he was awarded with the Heymans Prize. In 2012 the KNAW awarded his career contribution to the cognitive neuroscience with the Academy Professorship Prize (M€ 1.0).

Peter Hagoort is member of the Royal Netherlands Academy of Arts and Sciences (KNAW), of The Koninklijke Hollandsche Maatschappij der Wetenschappen, and of the Academia Europaea. In 2018 Peter Hagoort was elected as international member of the National Academy of Sciences and as Fellow of the Cognitive Science Society.

The listening and speaking brain

Ray Jackendoff’s research centers around the structure of the human language faculty and its role in human cognition. His approach, the Parallel Architecture, envisions language as the product of multiple combinatorial systems that interact to relate meaning to linguistic expression. Three of these systems have been developed in detail:

Simpler Syntax, in collaboration with Peter Culicover, proceeds from the premise that syntactic structure should be only as complex as is necessary to mediate between sound and meaning. It offers accounts of all the major syntactic phenomena and many lesser-known ones, stressing the interplay of syntax and semantics.

Relational Morphology, in collaboration with Jenny Audring, focuses on the balance between productivity and idiosyncrasy in the structure of words, and on the interaction between morphosyntax, morphophonology, and meaning. An important consequence is that the structure of the lexicon becomes central, overshadowing the role of traditional generative rules.

Along the way, Jackendoff’s research has also touched on language processing, emerging sign languages, the evolution of language, the relation of language to vision, and the character of consciousness. In collaboration with composer Fred Lerdahl, he has also made major contributions to the study of music cognition.

Ray Jackendoff has been President of both the Linguistic Society of America and the Society for Philosophy and Psychology. He holds honorary degrees from the Université du Québec à Montréal, Tel Aviv University, the Ohio State University, the National University of Music in Bucharest and the Music Academy of Cluj-Napoca. He was awarded the 2003 Jean Nicod Prize in Cognitive Philosophy, and he is the 2014 recipient of the David E. Rumelhart Prize, the premier award in the field of cognitive science. He is currently a Research Affiliate in the Department of Brain and Cognitive Sciences at MIT.

What is the form of the information that is transferred in language processing?

Marco Marelli’s research interests pertain to the processing of written words and how information is stored and represented within the semantic system. He is also interested in the interplay between these processes and other domains in human cognition, such as perception, action, and reasoning. These topics are investigated by combining experimental techniques (reaction times, analysis of eye-movements in reading, explicit judgments) with computational approaches (learning models, vector space models).

Understanding the meaning of compound words: A compositional perspective grounded in linguistic and visual experience

Petar Milin, Senior Lecturer in the Psychology of Language and Language Learning, Department of Modern Languages, University of Birmingham

Petar Milin’s primary research interests are concentrated in areas concerned with understanding the crucial role of learning in human language, its behaviour and use. Previously, his work focused on investigating word or lexical processing, but currently, it extends to the study of natural communication. Methodologically, his work combines experimentation and computational modelling with advanced statistical data analysis. He works with the Out Of Our Minds team towards an in-depth understanding of language knowledge and natural ways of learning a language.

His secondary research interests all relate to understanding probabilistic phenomena in language. These include problems that arise in characterising text quantification, stylometry and authorship, vocabulary richness and similar issues.

Maria Piñango is interested in how the process of integration of different linguistic information during comprehension in real-time occurs (focusing on the integration of semantic and syntactic information), and whether differences in the process of integration (i.e., differences in time-course of activation) find parallels in cortical realization and distribution. She is interested as well in the characterization of language deficits that result from brain damage, and in the interaction between linguistic processes and other cognitive capacities such as memory. She uses evidence from language deficits (aphasia), real-time processing and imaging techniques (in particular fMRI). The phenomena of her focus falls roughly within the confines of the syntax-lexico-semantic connection (both from the representational and processing perspective). This includes the characterization of the correspondence between argument structure and syntactic representation, establishing the connection in processing terms between the lexicon and syntactic representation, and determining the time-course of activation of syntactically opaque semantic combinatorial operations.